WELCOME TO THE COLLECTION 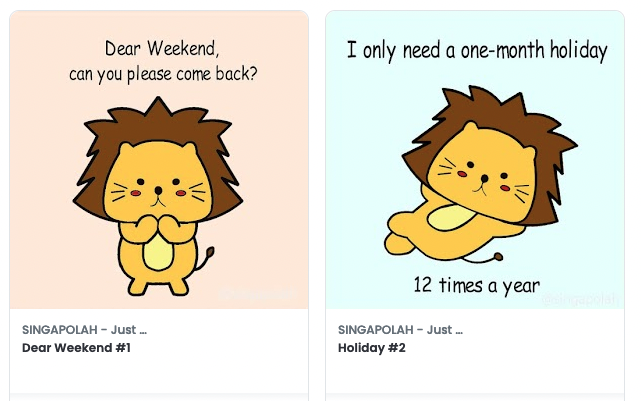 Productivity is a lie. Like a hamster running on a wheel, efficiency is simply running faster in the same spot. For each task cleared, more things simply appear to replace them, making us feel rushed and stressed.

Singa Polah is here to remind you to take a break with him.

common cause builds a community

Those who are interested in this cause is welcomed to join the Pride. No need to worry about rarity or special features because each of the NFTs are unique on their own.

Each NFT unlocks access to the rest of the lion pride where members can share a safe space online to just hang out and do nothing.

Additional benefits will accrue the longer you hold them such as sharing of profit from the sale of the final collage, future airdrops and more. This is why this series is called ‘Just Lion(lying) Around’ .

To reduce information overload and fraud, we won’t be setting up a discord channel and will rely mainly on Twitter to share news of new updates. We may set up some kind of chat group to just laze around together later.

Let’s see what the community thinks.

Created with love from Singapore, the character has adopted the name Singa(Lion) Polah which is a portmanteau of Singapore and ‘lah’ a Singlish term often used in Singapore.

Singaporean X Japanese team who are tired of the daily grind and want to create something chill on web3.

Previous works include collaborations with various government agencies and have been featured on national news too.